Welcome to the $200 desk setup, where the challenge is to find a desk, the accessories, and not only make it functional, but it’s gotta look good and most importantly, not exceed that price point. Now disclaimer, this does not include the computer or the speakers because that would pretty much single-handedly obliterate the entire budget. For now, the focus is for those who already have a computer, but need to shake things up as far as their setup goes. 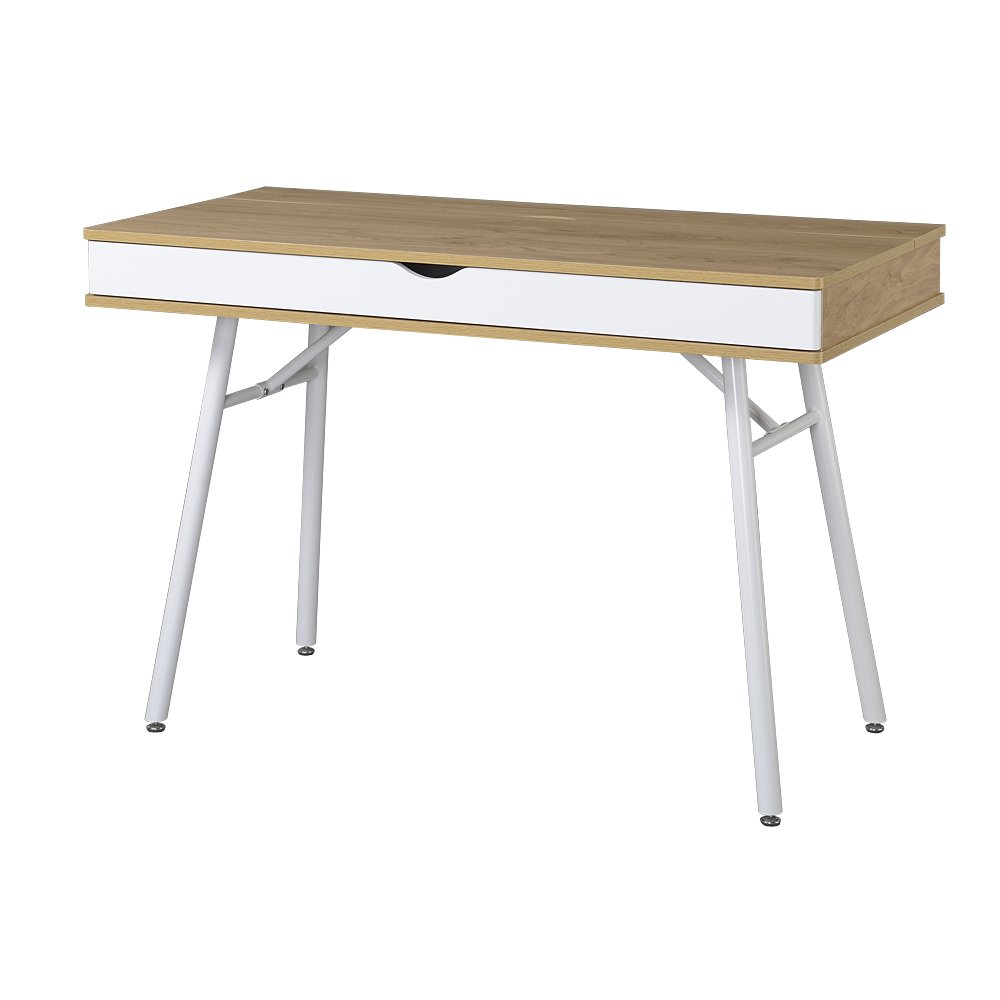 So for starters, we cannot do a setup challenge without a desk and for this, I went with Techni Mobili Modern Computer Desk which has this really clean pine laminated top, white accents, white steel legs, and gives you a pretty decent amount of real estate, while remaining relatively compact. Now currently as of right now, this desk is 110 bucks on Amazon. So that’s gonna give us roughly 90 bucks to play around with as far as accessories go, but a couple of things that stands out to me with this desk is one, the storage which is plenty of enough space to store your keyboard, your mouse, your pen, and your pencil.

Everybody is gonna appreciate some cable management and that is exactly what we have here on the back. This compartment opens up which is gonna be really helpful for hiding those pesky cables.

First up is the Globe Desk Lamp which is a really, really, tall box. Oh man, this is gonna be some assembly required. Be careful you don’t whip yourself up in the face. Initial impressions are up to the kinda sketchy installation, it’s not bad for 20 bucks at all.

Buy it now on Amazon

This is a $10 colored LED light bulb. We can get some changing colors. So we got red, green, blue. So it’s a lamp and a light bulb out of the way.

My biggest question right now is gonna be the LED strip for the back of the desk. This I’ve actually never messed with before so it could be interesting to set it up. What’s cool though from what I can see it that it’s actually powered by USB so you’re not gonna have to tinker around with power or possible electrocute yourself.

Following the LED light there are this really cool cable management strips. They come in a pack of five for around 12 bucks. Just like the LED strips, what’s also a nice touch with this is they come with the 3M adhesive pre-installed so you’re not gonna have to attach that or stick that on yourself.

Now functionally, the LED strip worked perfectly and for 10 bucks, having the built-in control was awesome. If you go with this setup, it’s actually a better move to place the LED strips slightly lower. What that’s gonna do is allow you to open and close the cable management portion of the desk without screwing up your LED strip.

Now realistically, you’re not gonna throw a USB bank inside your desk, so next stop is a surge protector from Poweradd. What I like about this is a in addition to the outlets, there are also two USB ports which in turn will power up the LED strip. It was almost a test within a test, but it was really nice to know that you’re not limited to one stick only on the LED strip so attaching that a second time worked just as well. From there, it was really about putting the finishing touches on the setup, but I gotta say, the cable management section worked really well and helped keep things super clean and tidy.

Total for this setup was just under 180 bucks which leaves us around 20 bucks to play around with. So in this case, I went ahead and threw in a fake plant and of course, Baby Groot.

Buy it now on Amazon

So, with the color we’re getting through the lights and the lighter tone of the desk itself, it looks really great against a darker wall especially at night. But, it also looks great in a lighter environment, in front of a white wall like this. All in all, for a 110 bucks, the desk is really solid. The one thing I will point out is you gotta be careful not to scratch because it is a laminate top. If you’re thinking about using a monitor, I would say 21 to 24 inches is probably the ideal sweet spot. The cable management is awesome. You pair that with the drawers on the front that helps keep things organized, pack on a few accessories and for two bills, we can get a really clean setup. Google Chromecast is a Must Have

The Perfect Adjustable Fan for your Dorm Room